☆ Baker Dude Cafe at The Beacon in Grant Park ☆

The good news is that Atlanta is a hot-bed for restaurants with a LOT of healthy options.  And knowing this, Orran came to me to create several healthier options for the cafe. One of my favorite foods that I created while snowboarding last holiday season was in response to the avocado toast craze.  See, I’m sensitive to gluten – diagnosed with a gluten intolerance but not an actual food allergy like celiac or Crohn’s disease. My body prefers NOT to have gluten. So I’ve avoided breads for a very long LONG time. Even the gluten-free one’s since they usually contain some form of corn and that’s worse than gluten for me.  So anyway, I found this scrumptious fancy-looking sourdough bread in Aspen which turned out to be the inspiration for what I created. Do you do that too? Oh btw, sometimes it’s the fructans in the food that cause the issues, not the gluten -I’ll go into more details in my FODMAP’s post so check back.

Back to my avo inspo…

Before hitting the slopes, I decided to load up at breakfast with a piece of toasted sourdough bread, teeny bit of coconut oil, spicy Hope hummus, avocado slices, stirfy green (I did a lot of kale and spinach but last night used radish greens) topped with some probiotic-rich food like Wild Brine red kraut, but whatever was local and topped with micro-sprouts.  Yeah, those teeny tiny sprouts that make your dish look all fancy-pants. They are packed with protein and nutrition so I love them for just about everything I create.

So the Ah-vocado Toast is delish.  Orran and Chelf Michal are experimenting with gluten-free and sourdough breads because when you make my avo toast recipe on sourdough bread, it truly is next level to have that tangy taste mixed with creamy avocado and pickled onion.  It’s just a great flavor combo. At home I tend to cut a THICK slice of double fermented sourdough bread and stack it with at least ½ cup of cooked greens, cuz I need cups and cups of greens a day to feel good but it might be a bit much for the normal dining guest.  But I bet if you asked to load it up with cooked greens they would. And the sprouts are just mini protein-packed nutrient dense goodness.

I also created the PR Pesto Egg Wrap, trust me it’s a savory keto-ish DELISH treat (ugh, I don’t promote trendy diets but if you are doing keto you’ll love it), Overnight Oats + Chia and the Goat Cheese + Honey Toast.  The Goat Cheese toast it REALLY good with a thick chunk of sourdough bread and a special kind of Turkish honey so this version might get lost in translation on the tongue. Unfortunately it’s a sourcing issue- no access to that honey and Baker Dude doesn’t make sourdough bread yet.  Regardless, we are working on other fun seasonal menu items and I’m excited to roll those out too!

I forgot to order the Chickpea salad (second shelf to the left in the case, picture above) but o.m.g. did I regret that because it looked amazing and would go nice with one of the sandwiches made on freshly baked bread. PS they also sell loaves of bread but they sell out quickly. I hope they start selling the pita bread that I was lucky enough to sample from Chef Michel. I was never a pita bread fan but that’s only because I’d never had it fresh. And it’s a game changer my friends. Totally. The store-bought stuff is inedible to me after tasting Baker Dude’s. I’m so spoiled! On top of all the delish menu options is perhaps one of the most crucial features that all restaurants who care about their guests should offer: amazing filtered water and ice! See this self-serve filtered water and ice dispenser? Wow, this just is next level! And it’s FREE! No you don’t have to buy bottled water and destroy and pollute our oceans with plastic bottles. ♽ So the environmentalist in me says THANK YOU ORRAN you are really going the extra mile giving away good water and not contributing to plastic pollution. If you live on this planet, then it’s your duty and mine, to take care of this beautiful amazing environment we should be honored to call home. Do your part. I def do mine! ♽ K great, we’re on the same page!

Oh and they also have live entertainment at night! So there really is a little bit of everything that this bakery and cafe has to offer. Grant Park residents are super lucky to have the entire staff at Baker Dude in your ‘hood. Make sure to go check it out and let me know what you ordered. BTW a gourmet cookie place is opening next door so you know I’ll have to weigh in on the chocolate chip ones.

PS: you can have dogs INSIDE the Beacon but not Baker Dude so we sat outside of the cafe at a table with Kingston and Orran brought him a container of filtered water… It doesn’t get any better than that! 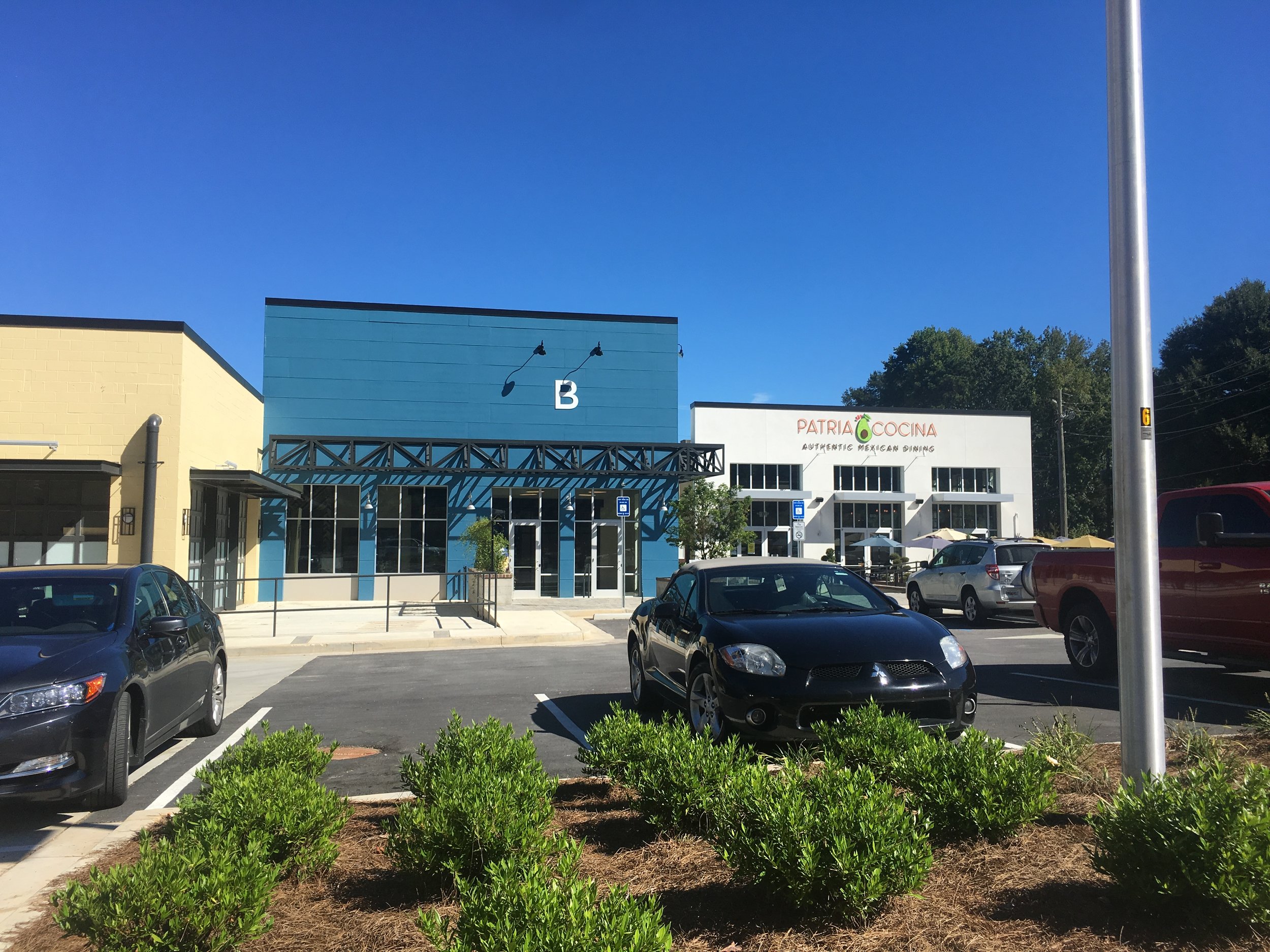 How to get there…

So great, you’re salivating and want to know where to get all this goodness, right? Baker Dude is located INSIDE the Beacon in Grant Park. Currently there isn’t a lot of signage so you have to enter building “B” and then you will see Baker Dude at the end of the hall on your right. You can’t miss the amazing cupcake piece of artwork on the wall – it’s awesome. Please tell them I sent you and let me know how it goes for you! I forgot to order a to-go of the chickpea salad but it looked really really good! Bravo Orran, Chef Michel, and the amazingly helpful staff at Baker Dude, I can’t wait to come back for another Yogi Yogurt Bowl 🙂

Like many of you, I’m feeling a very heavy heart and deep emotions about the national status and inequality we suffer from.

I have not/Hnat addressed racism on my blog or with you, but like so many others, I have had to process my feelings and now it’s time to speak to my community. Actually after learning about the history of racism, I’m ashamed I didn’t bring this topic up sooner.

Many of my are here for mindful + intuitive eating wisdom. But the truth of the matter is that we can not/Hnat do the anti-diet work without also doing the anti-racism work too.

They are in fact deeply and intimately related.

Anti-Racism and Anti-Diets: What is the Connection?

First thing’s first: we need fat in our diets.

Thankfully long gone is the fat-fearing diet days of the past with low-fat and fat-free products! Fats are essential for long-term energy, cell growth and communication, organ protection, insulation for your body, nutrient absorption, and hormone production.

There are numerous diets out there that are either at one extreme of the “fat spectrum” or the other. For example…

Getting back to basics: FAT

Hey y’all! My name is Harley Cobb and I’m a rising junior at the University of Georgia, majoring in Dietetics. I was born and raised in Charlotte, NC (the Queen City!) where I also became a 200-Hour RYS certified yoga instructor last summer.

This summer, I will be Jennifer’s “sidekick” in all things mindful and intuitive eating with Nutrition Atlanta!

Perfection is this unsustainable goal that can be toxic during a diet. It does not last long and can lead to negative mental chatter and falling off the diet wagon.

Dieting is not normal – or sustainable. But in todays world you would think that dieting is totally normal. The problem is that dieting and restriction is a swift gateway to binge-y like behaviors.

Why I Let Go of the Chronic Need to be PERFECT